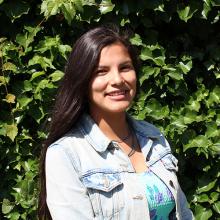 Rayanna Seymour-Hourie is Anishinaabe (Ojibway) from Lake of the Woods in Treaty #3 Territory (Northwestern Ontario). She received her Bachelor of Arts degree in 2015 from the University of Manitoba, and earned her Juris Doctor (law degree) from Robson Hall, University of Manitoba in 2018. She is now a Staff Lawyer at West Coast Environmental Law, working with the RELAW (Revitalizing Indigenous Law for Land, Air and Water) program. Rayanna’s work has focused on Anishinaabe Nibi Inaakonigewin (water laws), and how the laws and teachings that water carries can inform humans of their responsibilities to each other, the natural world and spiritual world. Rayanna’s dream is that all Indigenous nations protect their traditional lands against unwanted development, pollution and outside control with their own traditional laws. It is her career goal to support and work alongside Indigenous nations in achieving this dream.