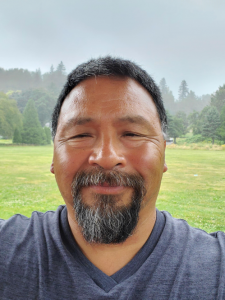 He has served as Councillor for Sumas First Nation from 1990 to 1998 and then 2003 to current.  Murray is currently the Executive Director of the Lower Fraser Fisheries Alliance (LFFA) and has been employed there since the organization’s inception in 2010 where he serves on numerous regional and provincial fishery committees, task and working groups.  He was appointed to the Pacific Salmon Commission in 2013 and is one of two First Nation Commissioners serving Canada’s interests in the Pacific Salmon Treaty.

Murray has participated in food, social, ceremonial and economic salmon fisheries for 40 years on the Fraser River and credits his late father, Clarence Ned, and late grandmother, Edna Ned, for providing the opportunity to learn how to fish, enabling him to pass that knowledge and practice down to his two boys, wife and family.  Murray’s ancestral name is Kwilosintun, which he shares with his sons Brandon and Kelsey.